skip to main | skip to sidebar


This article appeared first on Lianhe Zaobao on Sunday (28 March 2010) and then got translated into English on Straits Times on Monday (29 March 2010). The article titled "Chiam's SDP exit: Wife speaks up" is the first time Mrs Chiam is speaking on the issue and is revealing on the integrity of Chee Soon Juan. The integrity that of a liar and an opportunist.

A LONG-STANDING spat between Potong Pasir MP Chiam See Tong and former protege Chee Soon Juan has resurfaced, with Mr Chiam's wife and Dr Chee engaged in a fresh exchange of views.
The row centres on Dr Chee's role in Mr Chiam's dismissal as secretary-general of the opposition Singapore Democratic Party (SDP) in 1993 and his eventual exit from the party in 1996.
In an interview with the Chinese-language daily Lianhe Zaobao published yesterday, Mrs Lina Chiam dismissed comments that Dr Chee made in an earlier interview with the same newspaper that he had tried to persuade Mr Chiam to stay on.
She instead accused Dr Chee, who succeeded Mr Chiam as SDP chief, of ousting her husband from the party he founded in 1980. 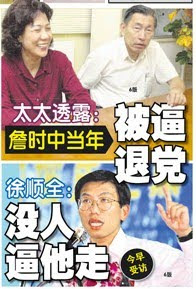 Mrs Chiam - who told the newspaper she was speaking with her husband's knowledge and authority - said that despite the SDP central executive committee's initial attempts in 1993 to make Mr Chiam stay, it held a disciplinary hearing in August that year, where it decided to expel him.
She said: "If he (Dr Chee) really wanted to keep Mr Chiam, he could have politely declined the position of secretary-general. Or when the central executive was taking a vote on whether to take disciplinary action against Chiam, he could have opposed the dismissal."
She noted that Dr Chee wrote to the Speaker of Parliament to tell him of Mr Chiam's ouster, and asked for any further necessary action to be taken.
The Constitution says that an MP who loses membership of the party he represented in a general election automatically loses his seat in Parliament.
Mr Chiam was elected as Potong Pasir MP in 1984 on the SDP ticket. He contested his expulsion from the SDP in court and left the party only in 1996 for the Singapore's People Party.
Mrs Chiam said: "The People's Action Party tried all means to defeat my husband, but failed after several general elections. But the SDP achieved it effortlessly with one stroke of the pen and did the PAP a great service."
Mr Chiam asked her to clarify the matter with Lianhe Zaobao after it interviewed Dr Chee, she said, adding that she wanted to set the record straight: "For the sake of my husband and to let the younger generation understand 'Uncle Chiam', I have to step forward to clarify matters. He did not turn his back on the SDP. When we were forced to leave, our hearts were filled with anguish."
Dr Chee told Lianhe Zaobao in his interview that he tried to persuade Mr Chiam - who had differences with the central executive in May 1993 - not to resign. He said he went to Mr Chiam's office several times to withdraw his resignation, "and told him he was still regarded as our leader".
Yesterday, Dr Chee reiterated that neither he, nor anyone else, forced Mr Chiam out. He told Shin Min Daily News that the SDP spent one month persuading Mr Chiam to change his mind: "But Chiam insisted that he would return to the SDP as its secretary-general only if the SDP central executive committee gave him the maximum power to appoint or remove any central executive or party member."
He also told the Chinese-language daily he did not want to take the issue further.

Donate to the Right Cause

TOC deemed us as pro-Govt or pro-PAP. Sorry we are pro-Singapore. We have replied to you to state that we are not affiliated to any political parties & we are disappointed that you failed to include in your article. And we are sorry that you choose to be a stooge of SDP. Enjoy producing thrash when the world wants to recycle them!

Join the NOT MY SDP Campaign

Paste this to your Blogs to spread the message

Cracks widen in SDP as PAP's legal action sinks in